FunctionSense
It's time to re-evaluate "how you've always done it"...

Taking shortcuts in life will sometimes come back to bite you. But there are some areas in life where shortcuts come in handy and make you more productive.  In AutoCAD there are shortcut keys that you can use to increase your speed and productivity.  Many old-time CADD jockeys are very familiar with using shortcut keys either through CTRL keys and Function keys or through the ACAD.PGP file.

If you are one of the newer generations CADD Jedis that were trained in AutoCAD to do 95% of your work with mouse points and clicks – A faster way there is!   You may think you’re pretty productive that way, but adding in some shortcut keys can further improve your performance.

In this post I’m going to show the CTRL keys that are probably the most commonly used:

CTRL Shift S: Displays the save as dialog box

CTRL shift V: Pastes data from windows clipboard as a block (Use this sparingly)

CTRL X:     Cuts objects from the current drawing to the Windows clipboard

Some other shortcuts that are Non-CTRL keys:

Note that CTRL C, X, and V and F1 should be part of your everyday Windows toolkit. You can use this in all your office apps and most any program that allows copying, pasting and cutting – it is nearly universal. No more sliding up to the Edit menu and selecting copy, paste or cut.

As with the CTRL keys above these are not the only shortcut keys available in AutoCAD but more of a sampling of the ones I think that will help increase your productivity.

If you’re looking for a way to boost your performance try taking CTRL of AutoCAD. In a future post I’ll talk about ACAD.PGP file which takes shortcut keys to a whole other level.

I would be curious to know how many people are already using these keys regularly – drop me an email if you are and which ones you find most useful.

The Hitchhikers Guide to AutoCAD

While reviewing an E-News Letter  recently from our Autodesk vendor I came across an interesting link in their featured Blog posts that took me to an Autodesk help site. Here I found a help series labeled “The Hitchhikers Guide to AutoCAD“.  Now if you are new to AutoCAD or have been a long time circle and line jock, but not much on more advanced features, this might be a good spot to start your climb.  This does not by any means have the info to make you an advanced Rock Star AutoCAD user, but if there is one or more areas that you have not ventured in to, like  creating your own Blocks, using Paper Space, using multileaders or Mtext, in lieu of the old Dtext that so many still use, these are straightforward, easy to understand  mini-tutorials on how to so these things.

Below is a basic capture of the home screen and the cool graphic that they use. 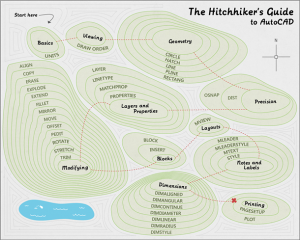 Welcome to The Hitchhiker’s Guide to AutoCAD—your guide to the basic 42 commands you need to create 2D drawings using modern AutoCAD or AutoCAD LT.

This guide is a great place to get started if you just completed your initial training, or to refresh your memory if you only use AutoCAD occasionally. As you can see from the illustration, the 42 commands are grouped together according to types of activity. In addition, these groups are arranged sequentially to follow a typical workflow.

Link:  The Hitchhikers Guide to AutoCAD

If you are new to AutoCAD or a casual user, I highly recommend you check this out!

Once you have checked it out and let me know what you think!

In a previous post I listed some videos for AutoCAD 2013 by Brian Benton and Revit MEP 2013 by Simon Whitbread, all published through Infinite Skills. Below are some additional resources that combine Blog articles, Videos and websites. I will update this post as new ones are found. If you have found some useful resources that you would like to share, send them to me and I will get them posted or add them as a comment to this post.

Note: There are tons of videos on YouTube that show you “how to do something”.
Go to Youtube.com and enter a search for a topic you are interested in.

Some people just can’t seem to make the leap to paper space – even though there would be many productivity gains to do so.  As I have been told and heard, we are quite content with how we do things now and see no reason to change.  Many people resist change as they believe it will slow them down or be too hard to learn.  You can usually tell the ones that are natural resistors to changes in AutoCAD software features by the rest of their AutoCAD tools and methods.

Although I prefer to convince those to change their ways and learn something new, sometimes it takes and in-between method to boost their productivity and understanding and so, I offer this productivity tip.

A common practice I see is for some firms to draw various plans with different scales, all on one sheet and scale it up or down to make it look right.

Example:  A building plan is setup to plot at 1/8″ scale with blown up part plans on the same sheet at 1/4″ and 1/2″ scales.  The most common problem is the most obvious – they are not drawn to scale.  Yes, when plotted they will scale out properly with an architects or engineer’s scale, but while working on it they are not.  I.e. you want to draw an air handler, mill work, or represent a piece of equipment that is 2′-4″ off the south wall and 4′-9″ off the east wall. So how do you place it?  For a 1/4″ scale blow up, you would double the distance for your offsets – so 4′-8″ off the south wall and 8′-18″ or 5′-6″ off the west wall.  The more odd the dimensions, the more math you do and the more chances you have to make mistakes – and trust me – you will make mistakes.

This one is pretty easy, but even so, I have made a few assumptions.

If you can’t get over the Paper space hump right now, at least setup your drawings in a way that can be more productive and accurate until you do.