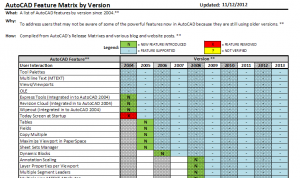 This is an update to my initial post about new AutoCAD features by version. This one adds AutoCAD 2014 to the list.

As was previously stated:  With each new version of AutoCAD there is typically a mass public release of blog posts, web updates and press releases with what the newest version does compared to the last or previous versions.   This is helpful for those that are considering making the move, but many skip multiple releases before taking the plunge.

The purpose of this Matrix is to let those know that may wait a long time between updates that there is often way more than just the current “New Features”.   AutoCAD 2014 for example has “4” NEW features, but a lot of enhancements to features that exist but are probably still new to many users.  If the new features alone convince you to purchase, then that’s great, but if you are on the fence, take a look at all new features introduced since your version and be sure to look in to one some of them can do for you.

Below are a couple links with more information about the changes made in AutoCAD 2014.  The first is a series of videos from Autodesk and  the second is a write-up on the “CAD-a-Blog” blog site by Brian Benton.

Note that I am a bit behind on this versions update, so you should know that Autodesk has recently released ‘Service Pack 1‘ for AutoCAD 2014.